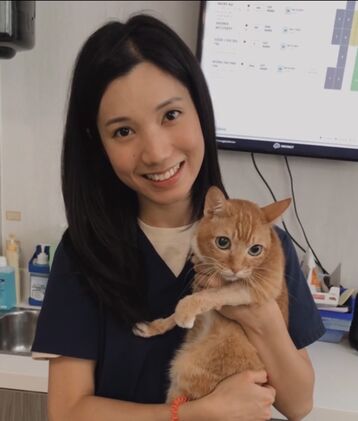 Meet our team of 3 dedicated Veterinarians of Dr. Eric's Animal's Clinic, its a small tight team so  you are ensured that you will see your family vet you are most used to, We also have a team of knowledgeable and qualified nurses that can answer animal queries you may have.   We're pleased to provide exceptional care for your beloved pets!

Nadia Rumjahn earned her Bachelor of Biological Sciences degree in Toronto, Canada. She subsequently went to Australia, where she pursued a Doctor of Veterinary Medicine degree at the University of Sydney.

After graduating in 2018, she returned to Hong Kong and worked as a primary care veterinarian at City University. What Nadia enjoys most about being a veterinarian is being able to advocate for pet welfare, work through challenging cases, and advancing in medical knowledge. Her special interests include internal medicine and innovations in animal health care.

Outside of work, Nadia is a mom to 1 cat and 3 dogs. She enjoys exploring cafes, listening to podcasts, and travelling.

Dr Harmony Ng graduated from Massey University, NZ (BVSc) in 2016. Since then she has worked in New Zealand, Australia and Hong Kong. She has always wanted to be a vet since she was a child.

Dogs, cats and horses are her favorite animals and she is an accomplished horse rider. She worked for a short stint in Namibia as a wildlife vet and it has changed her life in many positive ways, the great African Savanna has this effect on many. She cares deeply about her patients, puts her heart and soul into the well being of those critters under her care.  She always wants to improve her skills and knowledge to provide better treatments and care for her patients, leading her to join Dr. Eric's team to further her skills under Dr. Eric's mentor-ship. One of her lifetime goal is to have a big golden retriever family.

Dr. Eric is the proud owner of 28 dogs & 59 cats, 4 birds, 6 hamster, 6 guinea pigs, 1 rabbit and many fishes, most of which were adopted or saved from sad situations. His only pet that isn’t adopted is his Afgan Hound, Champion Satang Nevada Gold, is a 4 times consecutive Best of Hound Group in Hong Kong & a Hong Kong and Australian Champion. He has won Best of Show in Australia multiple times. Surprisingly his most famous pet isn’t Nevada at all, but a little pomeranian name“YY” she has 3 legs, a massive heart murmur, no teeth but a load of personality, she was 18 years old when she past away.Dr. Eric in his life has had 27 beloved dogs; 17 of which were pomeranians, 1 Terrier Cross, 1 Australian silky terrier, 1 St. Bernard, 2 Afgan Hounds, 1 Borzoi, 3 Shih Tze, 1 Longhair chihuahua, 1 Boizoi.  He also has cared for 59 cats, 4 rabbits, 8 guinea pigs, 1 Chinchilla, 7 Hamsters, 2 Chickens, 1 cockatiel, 2 african grey parrots and countless number of fishes, brackish, marine and fresh water. He used to be an avid breeder of African Chiclids (A type of fish from the great lakes of Africa and South America).  His oldest animal to date is a 27 year old African Grey Parrot has cared for 19 years that he saved from certain death, he is still alive and has the record of never been sick once and is still alive and well, the Parrot's favorite TV show is "Running Man", go figure.